All-Natural Soaps
Guaranteed to Soothe and Smooth the Skin 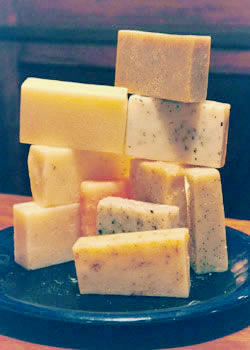 “Our soap making business began when I tried to find a mild natural soap that would moisturize my skin rather than dry it out,” said LaRee DeFreece. “I was looking for a soap made with one hundred percent natural plant-based ingredients and enriched with emollients.”

In late 2000, she decided to make her own soap. She had discovered that even the mildest of soaps was made of petrochemicals rather than natural ingredients. Searching the Internet, she came upon soap recipes and began testing them.

“That first recipe resulted in a soap that was truly disgusting, but I soon found one that would work much better,” she said. LaRee, a real estate attorney, had returned to college to study chemistry to become a plant patent attorney as well. She came to understand the chemistry of soap making.

She learned that coconut oil or palm kernel oil would produce a hard, long-lasting bar with a fluffy lather and that soy oil would create a stable lather with conditioning qualities. 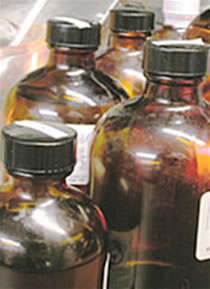 She learned that olive oil, a natural skin softener, would moisturize the skin. She found books that taught her the chemical equations for formulating soap recipes that would result in different desirable characteristics.

She researched the sources of natural ingredients, from the lye and oils that would serve as the basis for soap to the essential oils that would provide the scents. She realized that most people don’t understand the difference between essential oils derived from actual plants and manufactured synthetic fragrances.

“In searching the Web, I soon realized that, although there are a number of soap makers listed, there are only perhaps five percent that really use nothing but all-natural ingredients,” she said. 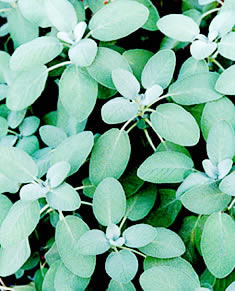 “While there’s nothing wrong with using chemicals to make soap, it has been important to me from the beginning that our soap be made completely of natural plant-based ingredients.”

At Christmas, LaRee gave bars of her soap to relatives and friends. That first soap was a mild citrus soap—with essential oils of orange, lemongrass and tangerine. It smelled great and the response was overwhelming. “Everyone loved it so much that I thought—maybe I’ve really got something here,” she thought.

Her husband, graphic artist and marketing expert Ken Gilberg thought so, too. Together they began making soap in earnest and named the new company Herbaria. Their first commercial customer was Gilberg Perennial Farm, owned and run by Ken’s sister-in-law Cindy Gilberg. When sales proved to be quite good in 2001, Cindy suggested that they apply to participate in Missouri Botanical Garden’s Best of Missouri which features state products made and sold by entrepreneurs from Kansas City to St. Louis. 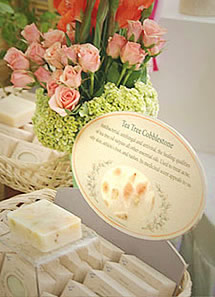 “At first, the cochairman of Best of Missouri said that applications had already closed for the October 2002 event. I said ‘let me send you a couple of bars of our soap and see how you like it’,” said LaRee. “A few days later, she called and said ‘you’re in!”

“That meant that we had to hustle,” Ken said. “We wanted to make 3,000 bars of soap in time to take to Best of Missouri. We made it. I think we sold over half of them.”

LaRee worked about 12 hours a day during the heat of summer to make enough soap for that first major push. She was making four batches a day. Her father had made mold boxes of some beautiful old wood. “They were works of art,” she said. “Each one would hold 54 bars of soap, so I made the recipe batches to fit that number. I would cut the bars apart with an antique butcher knife that my great-aunt had given me.”

A week before Best of Missouri, LaRee agreed to take a new job in real estate law that would begin the day after the show. Since the new job would be very demanding, she would be unable to devote as much time to the growing soap business. Ken, with over 30 years of experience in marketing, saw great opportunity for Herbaria. He added his own touches to the products. He standardized the bar size and designed new packaging and displays. He increased sales calls to businesses in the region and soon boosted production to 30,000 bars a year. 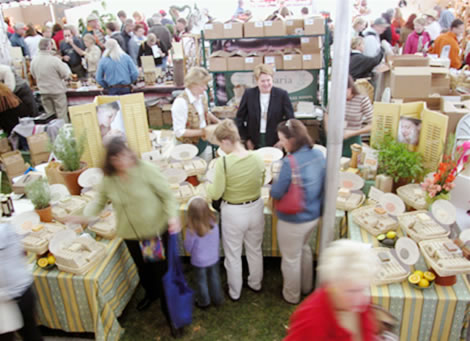 Following the success of their sales at Best of Missouri, the two expanded their horizons. Although LaRee wouldn’t be able to be as active, she remained an important member of the team, coming up with new recipes and scent combinations. The next big customer was the gift shop at the Gateway Arch. And those sales led to more sales at other national parks. The soaps sold in the national park shops were made with a focus on the 19th century in keeping with the emphasis on both the Civil War and Lewis & Clark.

The Bug Store, a St. Louis institution with two successful locations, became a loyal customer. The Greentree Shop at the Kirkwood Public Library also became a good customer. When LaRee heard about the children’s summer reading programs at the library Herbaria gave 400 bars of peppermint soap to be used as incentives, each bar awarded for 20 hours of reading.

“At about that time, I realized we would have to make some changes in our procedures if we were to grow,” Ken said. “We now manufacture our soaps in cubic-foot molds made of plastic lumber. After waiting two days for the soap to become solid, we cut it into loaves with special jigs fitted with guitar strings. Then the loaves are cut into bars with another guitar-string jig. The soap bars cure for two weeks and then are ready to wrap and pack.” 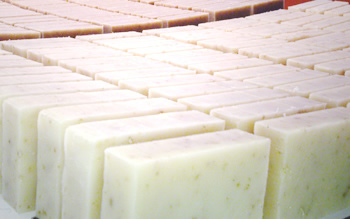 “The two-week curing period represents the finalization of the chemical process that transforms acids from fat and alkalis from sodium hydroxide (lye) into a salt that we call soap,” said LaRee. “Herbaria soaps are made the old-fashioned way that retains the naturally occurring glycerin. They are superfatted with shea butter, avocado oil, hemp seed oil or jojoba to attain an even more moisturizing quality.” 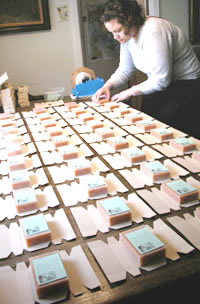 Ken has expanded the sales of Herbaria soaps to include the Missouri Historical Society and also a number of bed and breakfasts. In addition, sales from the Herbaria web site have increased to include orders from all over the United States.

“We hope to get sales up to over 60,000 bars a year,” Ken said. “Our product line now includes a natural citronella bar, an old-fashioned lye soap bar that is great for shampooing, and a bar with almond essential oil. Lavender Oatmeal and Spearmint Orange are the top two sellers of all our soaps.”

We absolutely guarantee your satisfaction.