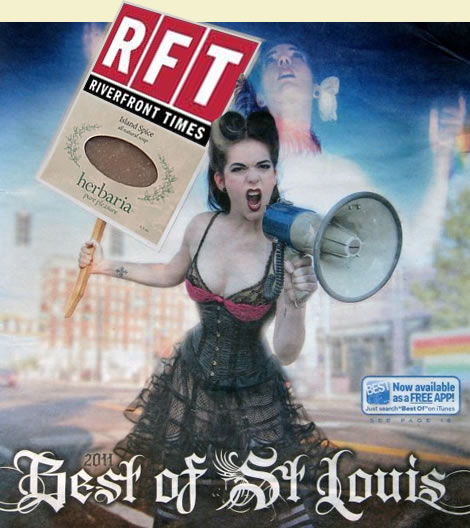 Our version of the RFT cover

“You can mess all you want with fancy chemicals, but nothing will get you cleaner than good old-fashioned soap and water. At least that's what they claim at Herbaria, the soap factory and emporium on the Hill. Nearly a decade ago, husband and wife Ken Gilberg and LaRee DeFreece started making soap in their Kirkwood home from all-natural ingredients (palm kernel, soy and olive oils, shea butter and oatmeal), scented with essential oils derived directly from plants and flowers. They started to sell the soap at farmers' markets, craft fairs and gift shops, and through mail order. They were so successful that, a year and a half ago, they opened a shop/factory on the Hill. Since then, they've expanded their soap repertoire to nearly 50 scents and added a host of other all-natural products, including shampoo, deodorant and even ant repellent, which smells most deliciously of cinnamon. In a neighborhood chock-full of restaurants, small groceries and bakeries, it would be presumptuous to claim that Herbaria is the best smelling store for blocks around, but if forced to do a ranking, it would surely come close.”

We absolutely guarantee your satisfaction.